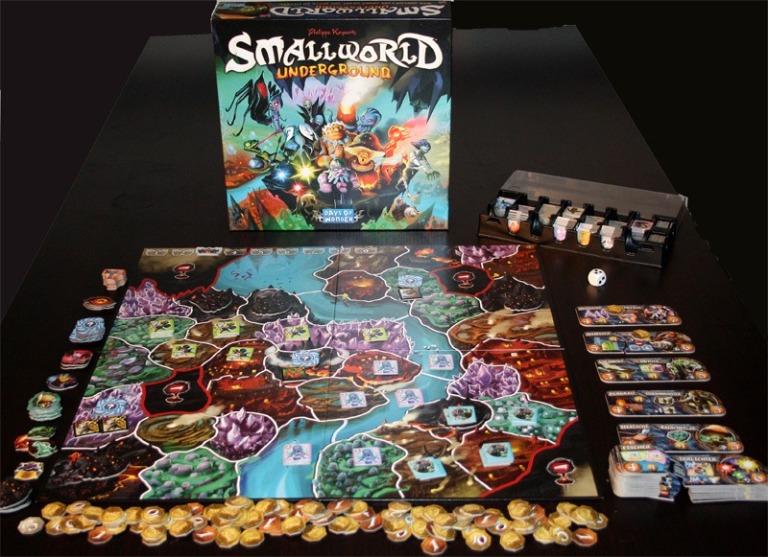 Another week, another game, and this week’s game is title called Smallworld by Days of Wonder. A game that I personally see a lot of potential in, but ultimately was left unsatisfied after playing.

The premise of the game is simple enough. You are a race of aliens with a particular set of skills of varying effectiveness. At the start of play, 5 race cards (from a total of 14) are drawn randomly, matched with 5 skill traits also randomly picked (20 total), and finally arranged vertically to be chosen from by the players. Choosing a race is free, but skipping over a race will cost a token, and players must start at the top of the list of races. Players that pick up races that have been skipped over, also recieve the token that was used to skip over said race.

I have a few issues with this set up, personally. With 280 possible combinations of races and skills, it is unlikely that anyone who isn’t a seasoned veteran of the game will be able to recognize useful combos. What they will immediately recognize is that the first row is free. Considering that the objective of the game is to have the most tokens at the end, I feel many will ignore the skip mechanic. In our playthrough, I was the only one to use it, just to see what would happen. Doing so ended up putting myself at a major disadvantage when it came to the financial aspect of the game. This mechanic I feel suffers most from the sheer number of races and skills in the game. It’s ridiculous to think that 280 different combinations can be balanced, and with each race and skill have its own rule to add on to the already lengthy ruleset makes for an overwhelming first play. Limiting the races to about seven, the skills to approximately 10-12, and the max number of players to 4 would be my first move.

The player count is another issue I have with the game. Smallworld describes itself as being playable by 2-5 people. The problem is the fact that there is a separate board for each instance of player count. Having four different but static boards seems like a clunky way of handling world generation in a game of conquest. After playing Catan’s modular board last week, this just seems like a missed opportunity to add some level of replayability for this title.